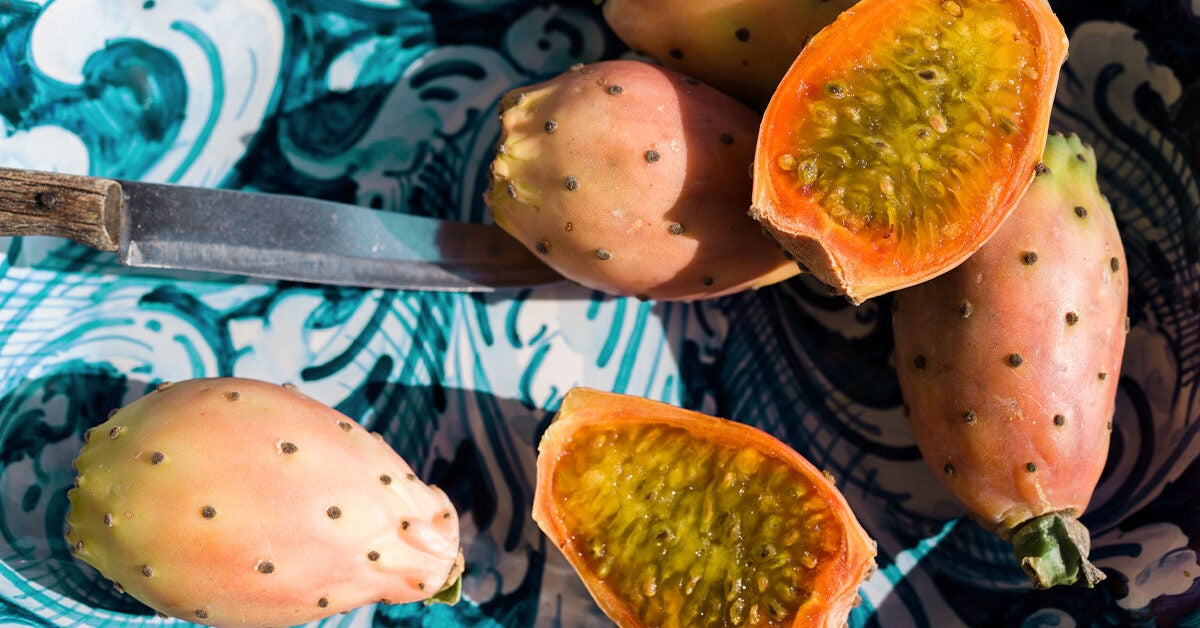 Prickly pear, a type of edible cactus fruit, is a sweet and delicious food that may have health benefits.

It has long been used in Mexican cuisine, and it’s growing in popularity in the American Southwest and beyond. Many parts of the plant are edible, and prickly pear fruit is used in cocktails, juices, jams, and other dishes.

In addition to its culinary uses, prickly pear has an impressive nutritional profile and may help promote health and protect against certain diseases.

This article explores prickly pear’s nutrition, possible benefits and downsides, and ways to prepare it.

The prickly pear cactus has wide, flat, green pads (or paddles) that are commonly referred to as nopales. Nopales are edible and served in Mexican egg dishes, salads, tacos, and soups (1).

They are fairly crunchy but can have a slimy texture, depending on how they’re prepared. The taste of nopales has been described as vegetal, slightly tart, and citrus-like (1).

The small, oval fruit that grows on top of nopales is the prickly pear, also known as tuna. It varies in color and can be green, pink, red, purple, or yellow-orange (1).

The flesh of prickly pears is juicy, contains seeds, and has a sweet taste similar to that of watermelon. You can eat prickly pear flesh raw or cooked. It’s often turned into juice and added to cocktails or cooked down into jams. Prickly pear flowers are also edible (1).

As the name suggests, prickly pear fruit and pads have prickles on their exterior. Known as glochids, they can stick to your hands and be very painful. Glochids need to be removed before consuming prickly pear (1).

Since it mainly grows in desert environments, prickly pear is very common in Mexico and the American Southwest. In fact, prickly pear cactus is the state plant of Texas. It is also grown in Italy and other parts of the Mediterranean ().

Due to the many beneficial plant compounds and nutrients it contains, prickly pear was used in Mexican folk medicine to treat ulcers, liver conditions, and other issues. The potential medicinal properties of this cactus fruit continue to be explored (, ).

Prickly pear is the name of the oval fruit with prickly skin and juicy flesh that grows on top of cactus paddles. It’s a common ingredient in Mexican cuisine and was historically used for medicinal purposes.

The nutritional profile of prickly pears may vary slightly depending on the variety. They’re generally a good source of fiber and contain many vitamins and minerals.

Prickly pears are a good source of dietary fiber, providing about 19% of the DV in 1 cup (149 grams). They contain both soluble and insoluble fiber, both of which are important for healthy digestion (, 5).

The magnesium, potassium, and calcium in prickly pears are key nutrients for healthy blood pressure, while vitamin C plays an important role in immune system health (, ).

Many of the purported benefits of prickly pear stem from its fiber and antioxidant content. While few human studies have analyzed prickly pear’s ability to promote health, preliminary research suggests promising results.

The fiber in prickly pear cactus plants may aid weight loss by binding to dietary fat, increasing its excretion and reducing energy absorption (8, ).

A study including 20 healthy adults found that taking 2 tablets, each containing 500 mg of cactus fiber, 3 times per day (a total of 3 grams of cactus fiber daily) after meals led to significantly more fecal fat excretion, compared with a placebo ().

The study authors concluded that these results supported the idea that cactus fiber could play a role in weight loss by reducing the amount of dietary fat available for absorption. However, they did not measure weight loss in the participants ().

However, other studies on cactus fiber tablets’ ability to increase fecal fat excretion have tracked weight loss. One 12-week study noted that supplementing with cactus fiber led to greater weight loss, compared with a placebo (8).

While the results of these studies are interesting, it’s important to note that they have focused on fiber tablets derived from the prickly pear cactus plant — not the fruit itself.

A typical prickly pear fruit contains more than three grams of fiber and is relatively low in calories, so you may see similar weight loss benefits. However, more research is needed to understand how eating prickly pear may play a role in weight management ().

Eating prickly pear is often boasted as a way to get glowing skin and shiny hair. Variations of prickly pear are even added to hair conditioners and skin care products.

Some of its compounds and nutrients, like vitamin C and betalain pigments, have anti-inflammatory and antioxidant effects. Prickly pear also contains polyunsaturated fatty acids, especially in the seeds and peel, which play a role in skin and hair health (, ).

A small study including 18 healthy adults found that consuming 250 grams of prickly pear fruit pulp twice daily for 2 weeks was comparable to a vitamin C supplement in regards to increasing blood levels of the antioxidant vitamins C and E and reducing oxidative stress ().

The antioxidant boost from prickly pear may improve skin and hair health by protecting against damage to these areas caused by oxidative stress related to aging, inflammation, sun exposure, or other causes (, ).

Still, no studies have specifically focused on prickly pear’s benefits for skin or hair. As such, the theory that antioxidant-rich prickly pair protects against skin and hair damage is mostly untested.

However, topical applications of prickly pear for skin — but not hair — have been studied.

One study in test tubes and rats found that oil pressed from prickly pear seeds had antimicrobial effects against skin infections and wound-healing properties ().

Another possible benefit of prickly pear is its use in blood sugar management and diabetes complications.

The soluble fiber pectin in prickly pears may have blood-sugar-lowering properties and beneficial effects on blood fat levels (, ).

Some preliminary studies in humans suggest that prickly pear consumption may decrease fasting blood sugar levels and post-meal insulin levels in both healthy adults and those with type 2 diabetes ().

However, the findings have been mixed, and the effects of prickly pear seem to be largely dependent on the form of consumption and the part of the plant used.

However, prickly pear fruit may be more beneficial than the pads when it comes to heart health. Many people with type 2 diabetes have high triglyceride and total and LDL “bad” cholesterol levels, which may increase the risk of heart disease (, ).

Eating prickly pear fruit may lead to significant reductions in total and LDL cholesterol levels, according to another systematic review of 11 studies including both healthy adults and those with type 2 diabetes and other metabolic conditions ().

On the other hand, the consumption of cactus pads or powders made from this part of the cactus did not appear to have equally beneficial effects on blood fat levels ().

More research is needed to understand how much and what form of prickly pear is most helpful for managing blood sugar levels and improving blood fat levels.

Prickly pear has been historically used to treat liver problems, and some modern studies back this idea.

It’s thought that the antioxidant compounds in prickly pear help protect against inflammation and oxidative stress that can damage the liver ().

One study in rats with obesity found that eating prickly pear cactus may protect against nonalcoholic fatty liver disease, in part by decreasing oxidative stress ().

Prickly pear may have similar effects in humans who drink alcohol. A study in 55 healthy adults found that taking an extract of the cactus plant before drinking alcohol helped reduce hangover symptoms and blood markers of inflammation more than a placebo ().

However, more research in humans is needed to better understand prickly pear’s effects on liver health. It’s also unclear whether consuming prickly pear fruit offers benefits comparable to those of consuming other parts of the plant.

Prickly pear is safe to consume when properly prepared, but it may have some downsides.

If you eat too much prickly pear, you may experience side effects related to excessive fiber consumption. These include diarrhea, indigestion, bloating, or nausea.

Additionally, prickly pear fruit seeds have been linked to rare cases of bowel obstruction. When consumed in excess, they could form a nondigestible obstruction that causes fecal impaction (22, ).

However, there isn’t much research on prickly pear supplements and extracts. Pregnant and lactating people should talk with their healthcare team and probably avoid these products due to a lack of knowledge about their side effects.

The glochids (prickles) on the exterior of prickly pears need to be carefully removed during preparation so that they don’t get lodged in your skin or ingested.

Prickly pear is safe to eat in moderate amounts when properly prepared. Due to its high fiber content, excess consumption of this food could lead to digestive discomfort and related symptoms.

Depending on where you got the prickly pear fruit or pads, the glochids may already be removed.

If the prickles are still on the cactus pads, use a blunt knife to scrape them off and then remove the “eyes” that held them. Peel the pads with a vegetable peeler to remove the skin (1).

You can then slice the cactus pads into strips or dice them into cubes to use in recipes.

To remove the prickles from a prickly pear fruit, you can singe them off over a gas stove or fire. Use tongs to hold the fruit if you use this method. Alternatively, you can scrub the glochids off with a vegetable brush (1).

Next, make a few slits in the skin and peel it off. Cut the prickly pear in half and remove the seeds before slicing it into your desired shape (1).

To properly prepare prickly pear fruit or pads, you must first remove the glochids and skin. Then you can slice it into your desired shape and use it in recipes.

When cooking nopales, you may notice that they emit a gel, similar to what you might see on okra. Isabel Eats, a recipe blog run by a first-generation Mexican American, provides tips on removing the slimy liquid and how to cook nopales.

Prickly pear fruit, on the other hand, is usually used in juices, cocktails, jams, and more. It also makes a delicious snack cut up and served on its own or with other fruits.

Enjoy prickly pear cactus pads with scrambled eggs or added to salads and soups. Prickly pear fruit is delicious on its own or in juices and smoothies.

Prickly pear fruit grows on top of the flat paddles of the Opuntia ficus-indica cactus plant.

It’s rich in fiber and contains many antioxidant compounds. As a result, it’s thought to help with weight loss, blood sugar management, liver health, and more. However, more research in humans is needed.

You can enjoy prickly pear fruit and pads in a variety of recipes, especially Mexican cuisine.